What is bearing corrosion and how do we avoid it?


Humidity and water cause the bearing to run out of lubricant. In a short time, the damage can be catastrophic.

Humidity is usually present in most industries, such as the Steel Industry in the continuous casting, hot rolling and cold rolling processes.

The presence of humidity or acids, using low quality or degraded greases, or condensation caused by temperature changes can cause corrosion in a bearing. This corrosion can have an abrasive effect in the surfaces of ball and roller bearings.

How to detect if our bearing has corrosion?


One way to detect corrosion in a bearing is to look for red and brown deposits and stains on the rolling elements, tracks or cages of a bearing. Other signs are an increase in vibration followed by wear or an increase in radial clearance in the bearing. 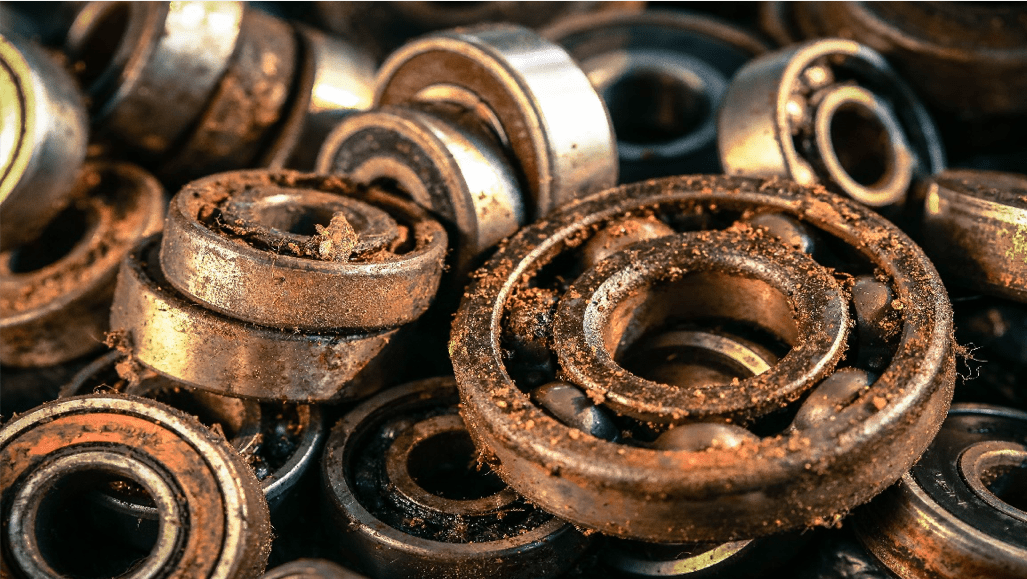 
What causes corrosion and how to fight it?


The first step we must take is to prevent the entry of any fluid that is corrosive into the bearings. That is the main cause of corrosion.

Other causes of corrosion can be the use of the wrong lubricant or the contamination of this lubricant by other fluids such as water or solvents. The former will create and insufficient oil layer between the moving elements, unable to keep the contact surfaces apart. The latter will dilute the lubricant and provoke a corrosion effect inside the bearing.

There are different types of corrosion capable of causing bearing failure. When grooves are produced, there is humidity in the system or water entered the bearing as steam or through condensation due to seal failure. This may affect the performance of the lubricant adversely.

Oxidation corrosion on the other hand, usually affects the surface of the rings or rolling elements. This type of damage is usually caused by exposure to high temperatures and high humidity during periods of inactivity or by small amounts of water leaking in. Oxidation mainly affects those machines that remain inoperative for long periods of time, especially if they are located in particularly humid places.

In these cases, it is convenient to apply an antioxidant treatment in the system as a preventive measure.

However, corrosion can also be caused by improper handling. It is recommended that bearings are kept in their protective packaging until they are used and if possible, to use protective anti-linting gloves when handling them.

In addition, inadequate or insufficient lubrication can lead to further damage in the bearing. That’s why early identification can help prevent total failure of the system.

Within our technological platform, we have a grease that specializes in protecting bearings regardless of the presence of water and extreme loads. Uniplex EXP is designed to form a seal that repels water and ensures the presence of a lubricant film in the rolling area. This protects the bearings and helps to extend their operating life.

Uniplex EXP is a grease that has outstanding water washout resistance properties, with a 1.45% result in ASTM D-1264 Water Washout Resistance standard test. It is ideal for the lubrication of mechanisms that operate at low speeds, while providing excellent sealing properties against damp environments and aggressive contaminants such as alkaline and acidic substances.

Get the newest articles and be up to date on everything that happens on the lubrication world.